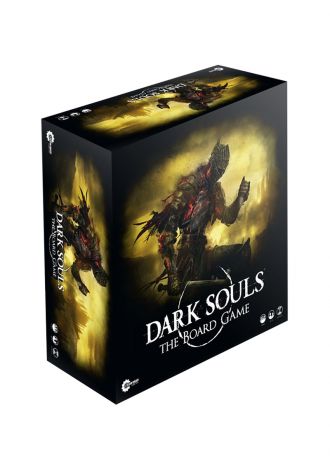 Dark Souls™ - The Board Game is a strategically challenging, deeply immersive combat exploration game for 1-4 players set in the Dark Souls™ universe. Players choose from a number of core character classes and explore dangerous locations full of monsters, treasures, and deadly boss fights.

Designed specifically for the Dark Souls™ universe and introducing a number of innovative gameplay mechanics, with world-class miniatures faithful to the rich universe, this game delivers an experience that captures the very essence of the original video games.

Dark Souls™ - The Board Game is much more than a classic dungeon crawler. Just like the Dark Souls™ video games, this is a game that requires strategic thinking, clever planning, and exemplary execution to succeed.

To triumph, players must explore dangerous locations, discover and defeat enemies, and collect equipment and treasures before ultimately facing the boss in an epic fight to the death.

Playable in either Solo or Co-op modes, players choose their role from a number of core Dark Souls™ character classes. Each class has a distinct role to play in the game, with a unique set of strengths and abilities.

With multiple difficulty modes and a high-level of replayability, this is a game designed to be deep enough to satisfy hard-core tabletop gamers whilst remaining accessible to newer players.

With no fixed scenario layouts, it’s as simple as choosing the direction to explore, placing a new tile down and flipping a card from the Encounter deck.

Each time you decide where to go, you will experience a new danger as you explore, with each new location a real risk to your hard-won progress. If you die, then you drop everything you have collected and reappear at the nearest bonfire. So do you return to the bonfire to rest and spend Souls to strengthen up, but in doing so fully reset the locations? Or do you press on and pray that the next encounter isn’t beyond your capabilities? After all, the next location may contain a clue to the Boss and how to defeat them…

The game features a “dynamic positioning system” which makes combat fluid and ever-changing. With the game state constantly shifting as combatants move around the battlefield, players must stay alert to danger and opportunities.

Equipment, armour, and weapons are discovered or earned during play, but with limited slots players must think carefully about what is best to keep and use. Using a simple stamina management system, players can potentially leave themselves exhausted and vulnerable. Death is usually swift to follow a poor decision in combat.

Using our advanced miniatures development pipeline and working with one of the finest board game manufacturers in the world, the quality and detail in the miniatures is world-class. With the entirety of the Dark Souls™ universe available to use, one of the hardest decisions has been to narrow down which enemies and bosses to include in the core game.